The July 2021 reading list selections include works from two Pulitzer Prize winners, three DANGER CLOSE Podcast guests, and a true story that is ultimately a cautionary tale of unintended consequences, in this case specific to the connections between the fall of the Soviet Union and the rise of Islamic terrorism.  Be sure to check out my stand-alone book specific Instagram page @JackCarrBookClub for a book club type experience in a place you can explore all my reading list selections in one location. If you are just discovering these lists for the first time and want to check out past selections, they are all posted to the blog section of my website.  For those new to the Team, each month I highlight six books, some from the professional reading list I was asked to put together for the Naval Special Warfare Center before I retired from the SEAL Teams and others that I have enjoyed at various stages of my life not directly associated with my time in the military. Interested in the “how” and “why” behind the books that influenced me?  You might find one that resonates.  Happy reading! Out of the Mountains by David Kilcullen

I first became aware of Dr. David Kilcullen when I was deployed to Iraq in 2005/2006 through the online Small Wars Journal that was gaining prominence at the time among those on the ground engaged at the tactical level.  This was a period when senior level leadership refused to even say the term “insurgency.”  He published his “Twenty-Eight Articles” of Counterinsurgency during this timeframe and I was immediately taken with his command of the subject, backed up by practical experience.  We would meet a few years later and have since had many discussions on countering insurgencies at the tactical, operational and strategic levels to include on Episode 16 of my DANGER CLOSE Podcast.  You will find his influence woven throughout my novels.  I am proud to call him a friend.  Without a doubt, I was a far better combat leader because of his influence.  I am honored to be quoted in Chapter Two of Out of the Mountains, in the case study of the 2008 Mumbai terror attacks.  As with everything David Kilcullen writes, Out of the Mountains is required reading. 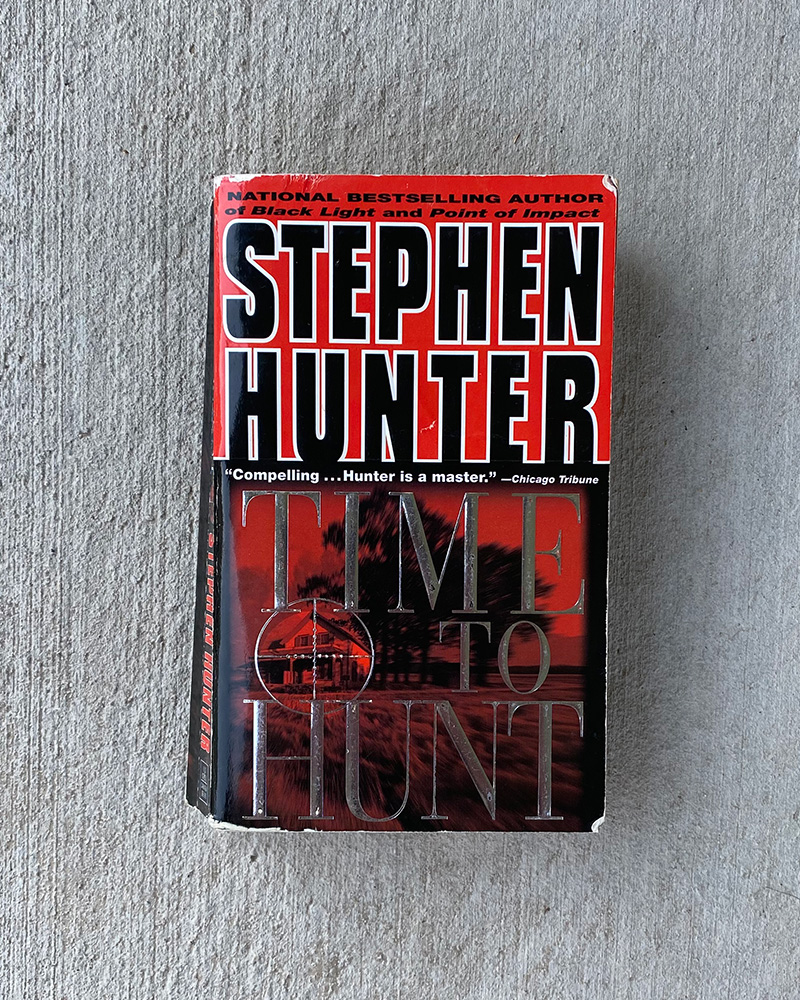 Time to Hunt by Stephen Hunter

The legendary Stephen Hunter introduced the world to Marine Corps Sniper, Bob Lee Swagger in 1993’s Point of Impact.  After I read it, I quickly tracked down everything written by Stephen Hunter up to that point and haven’t missed a book or article since.  A novelist and Pulitzer Prize winning film critic, Stephen Hunter also served in the 3rd U.S. Army Infantry Regiment, The Old Guard. Time to Hunt arrived in 1998 when I was “new guy” at my first SEAL Team.  I could not read it fast enough.

In the days following 9/11, I printed calling cards for the snipers of my platoon right out of the pages of Point of Impact, pirating Steve McQueen’s famous line from The Magnificent Seven: “We deal in lead, friend.”  I still have a few boxed up with other memories from my time in uniform.

I am honored and humbled that Stephen was kind enough to read and blurb my first novel, The Terminal List.  These days we are friends who enjoy catching up over a shared love of wine and bourbon.  Stephen’s upcoming Bob Lee Swagger novel, Targeted, will be out in January when you can expect to hear him on the DANGER CLOSE Podcast. I read Charlie Wilson’s War upon publication in 2003.  I had just returned from Afghanistan and was continuing to read all I could about the region, the history, people, politics, and economy in order to gain a better understating of the conflict in which we were engaged.  I had been studying Afghanistan since I was extremely young, always gravitating toward newspaper and magazine articles about the Soviet invasion and subsequent war.  As with many at the time, I looked up to the mujahideen fighters defending their homeland from our Cold War adversary, the Soviet Union.  Little did I know what was going on behind scenes or that we as a nation would face the unintended consequences of what may be the most successful covert action program in CIA history.  The story is so extraordinary that it was made into the 2007 film starring Tom Hanks, Julia Roberts and Philip Seymour Hoffman.  Even if you have seen the movie, I highly recommend reading this book.  It is perhaps more relevant today as the United States prepares to put the past twenty years of involvement there in the rearview mirror than it was upon publication.

The last Soviet soldier departed Afghanistan on February 15, 1989.  Even though I was in high school, I remember the day well.  I wonder if thirty years from now, a soldier, statesman or intelligence officer will look back to a date in high school and remember the last U.S. servicemember leaving Afghanistan and reflect on the lessons and unintended consequences of our time in the graveyard of empires. 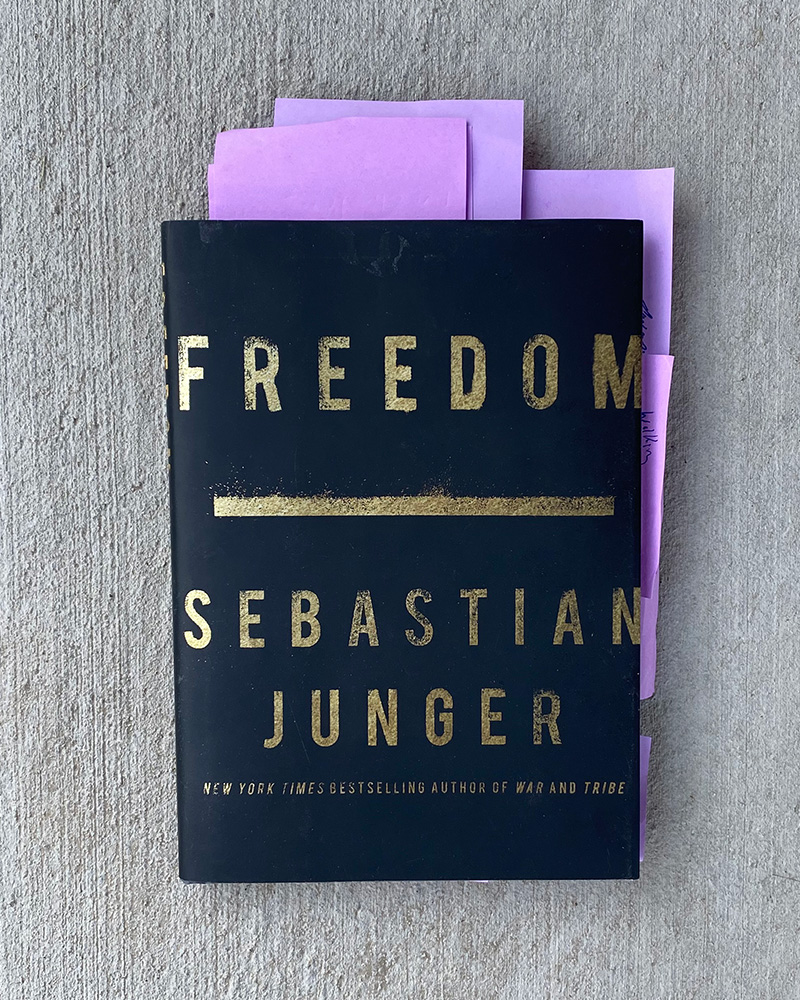 Sebastian Junger’s latest work, Freedom, explores the tensions between self-reliance and community as he treks 400-miles along east coast railroad lines.  He is a journalist, war correspondent, number one New York Times bestselling author, and award-winning documentary filmmaker. I first became aware of Sebastian’s work through his debut novel, The Perfect Storm, which spent three years on the New York Times bestsellers list and was later made into the movie starring George Clooney and Mark Wahlberg.  His film, Restrepo, documents the wartime experience of a platoon in Afghanistan’s Korengal Valley and was nominated for an Academy Award.  He is the author of Fire, A Death in Belmont, War, and Tribe.  Sebastian was kind enough to sit down with me on Episode 17 of the DANGER CLOSE Podcast where we discuss Freedom, Afghanistan and a recent near-death experience that has reshaped how Sebastian lives and reflects on life. The Afghan Campaign by Steven Pressfield

I read The Afghan Campaign soon after it was published in 2006.  Though historical fiction set in 330 BC around Alexander the Great’s push into what we now call Afghanistan, it was incredibly timely as we found ourselves bogged down in two wars that senior level military and government officials were loath to call insurgencies.  Stephen and I have had many interactions over the past two years some recorded and others more personal.  You can find one of our conversations on Episode 15 of the DANGER CLOSE Podcast.

As Steven writes on his website: “…Alexander’s war in the region that would become Afghanistan (it was called Bactria, Areia, Arachosia, Drangiana, Gedrosia and Sogdiana in his day) was a dead-ringer for our American war in the same places 2300 years later… A modern Western army found itself engaged with a primitive, fiercely-resisting tribal foe and, despite all its technical and logistical advantages, could not achieve victory… Our troops were up against tribalism in its purest form, just like Alexander. And tribalism, it turns out, is a helluva fighting concept and produces warriors whose own primitiveness is their greatest strength.” The Bridge of San Louis Rey by Thornton Wilder

My dad introduced me to Thornton Wilder’s Pulitzer Prize winning novel when I was very young.  He referenced it often as it was a book that had a significant impact on him as a young man. I was aware of its themes of fate, meaning and human nature well before I finally cracked it open in high school.  I wouldn’t revisit it again until I was deployed to Ramadi, Iraq in 2005 and 2006, a time when the IED threat, particularly EFPs from Iran, posed a significant threat.  If you have read my novels, you will be familiar with them.  Thornton Wilder tell us that the question raised by his 1928 novel is clear: “Is there a direction and meaning in lives beyond the individual’s own will?”  That was certainly a question to consider as we loaded up on gun trucks and speed into what was arguably one of the most dangerous cities on earth at the time.  The power in Thornton Wilder’s work is that as we read the opening lines, and every word thereafter, we, as readers, see ourselves on the bridge: “On Friday noon, July the twentieth, 1714, the finest bridge in all Peru broke and precipitated five travelers into the gulf below.”   In the Forward to the 2003 edition, Russel Banks reminds us of the connection between Wilder’s exploration of humanity and fate to the events of September 11th 2001.  The parallels were evident to Prime Minister Tony Blair who read the closing lines from The Bridge of San Louis Rey at a service in New York memorializing British victims of the attacks: “But soon we shall die and all memory of those five will have left the earth, and we ourselves shall be loved for a while and forgotten.  But the love will have been enough; all those impulses of love return to the love that made them.  Even memory is not necessary for love.  There is a land of the living and a land of the dead and the bridge is love, the only survival, the only meaning.” 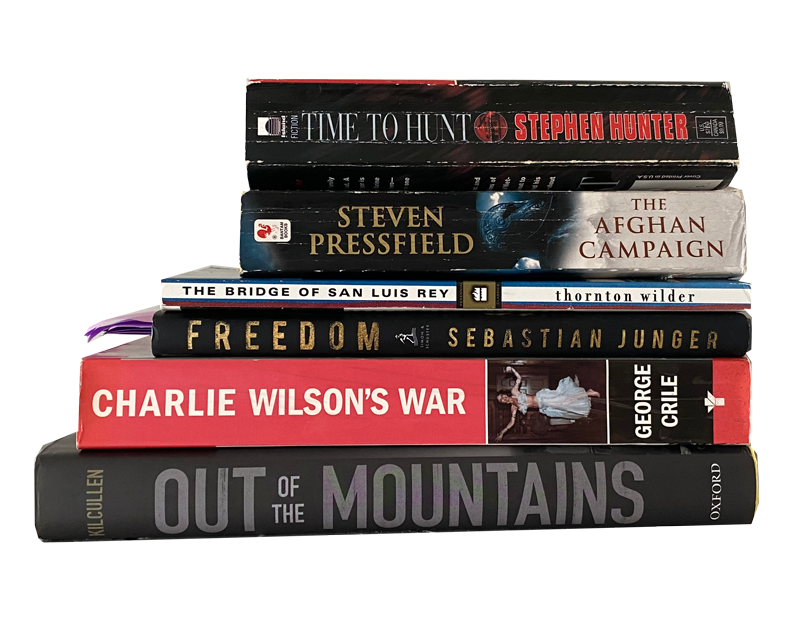